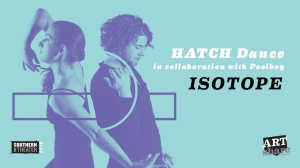 On a immensely comfortable Thursday night in Minneapolis I attended an exciting night of modern dance created by the company called HATCH Dance Company who meld modalities and approaches with a hip twist. Local artists Helen Hatch and Seth Conover, of Poolboy, confront the shadow self through original live music and fresh movement from a vibrant group of dancers. The excitement was very alive because I’ve seen Poolboy many times and have experienced the wonder of the band. I was very keen to support a collaboration between local artists of different modes. The combination of classical and modern dance with the grooves of local indie, atmospheric music created an eager anticipation of supreme joy within this audience member.

The show began with a fury of frantic, yet immensely beautiful movements from the entire company. The energy of each performer was a power the audience could genuinely feel making the conversation present take on a level of immediacy and genuine authenticity. I was awoken from the mental slumber I was in.

As you can see in the images, the variety of movements spanned from whole body configurations to minute hand sequences, such as the sequence below.

The music from Poolboy varied in tempos immediately giving glimpses of the rhythm of everyday life. I recognized many of their songs such as the very intimate “Personal Space,” which has had much play on 89.3 the Current since its release earlier this year.

The pace of the music and movement hypnotized me into a state of heightened awareness. The variety of tempos made thoughts of ennui an impossibility. The emotional rollercoaster we experienced thrilled the crowd, in the sense of subtle acrobatics, to vigorous classical ballet sequences. The dichotomy of modes gave every second a unique energy. Seeing movements of this caliber makes me wish for different modes of communication for humans. I long for a conversation similar to sign language where the body is the main conduit for emotional expression.

The solo portions such as the one above, by Berit Christina Ahlgren, gave a sense of power and identity within the world created by Isotope. Berit commanded the stage with a delicate ferocity allowing paving the road to heightened emotional territory.

As a live music fanatic, Isotope had much strength in action and sound. Combining the music of Poolboy with the attitude and edginess of Helen’s sophisticated dance choreography made each moment pulse with excitement. The intricate series of movements left me spellbound and desiring more. More from the night, more from the company, and certainly more out of my life.

The revelations I experienced during Isotope were quite powerful because I now focused on the “unseen moments”  in the company I keep and the society we live in. For me, this type of critical discussion has more meaning as I’m asked to respond etherally to my daily life. The conversation continued with the cast in the talkback after the show where audience members inquired about the journey Helen and company went on while creating the show. The majority of the responses mentioned how the company exists as such a supportive unit and each idea presented was looked at and examined to create the wonderful performance we had all just experienced. Thank you for allowing us into the creative realm you exist in HATCH Dance!

If you’re interested in exploring Poolboy’s amazing collection of music you can check them out here, Poolboy website. This was another brilliant installation of the Southern Theater’s ARTSHARE program. I highly suggest looking into this great ticketing program.

In the end, I urge you all to get out and take advantage of the extensive array of live performances in the twin cities. Then you will certainly be as righteous as the epic duo Bill S. Preston & Ted Theodore Logan. Rock On!

*Thank you Dan Norman for allowing the use of the brilliant images!