What better way to celebrate the warmth than to attend a night where the money earned goes to a local youth organization called The Bridge, dedicated to providing the connection between the current realities of homelessness and a brighter, safer, more stable future. My friend Logan asked me if I would work his merch table while he painted. I arrived and instantly looked up the stairs and I found him setting up his canvas. I approached the canvas and was immediately wowed by his intricate work thus far. The first musician taking the stage was a brilliant act by the name of Symone Smash It, described by their website as existing in a community of all space babes, androids, mystical creatures, and other extra terrestrials. I was ready for an intergalactic journey into the depths of bedazzled passageways. Have a gander at one of their songs:

The dancers Symone had onstage supporting the disco style were uncanny! I was transported into a new dimension where communication is done physically with the kicks Symone and gang are enjoying. The name of this language is Love. Symone speaks it magnificently! Thank you Symone Smash It for an absolutely enchanting performance Up next was the exquisite spirit who goes by Xaria. Having spoken to her moments before she graced the stage I was informed that she hand made the garments she was wearing. She also asked if I enjoyed the the recorder. I responded that I highly enjoyed the music instruction we had in elementary school to which she assured my enjoyment of her set.

Xaria took us on a musical journey within an exciting dream. I loved every moment of this voyage through the bedazzled wormhole.(it helped that the screens placed around the venue playing animations of entering wormholes). Then she took us on the promised voyage into a surreal vortex while she played her recorder.

There were hula hoopers, devil stick manipulators, and Poi performers manipulating their bodies while spinning poi and juggling devil sticks.

I was not familiar with the hip hop act seen here, but they had some nice beats and decent lyrics making their set enjoyable. The jugglers and hoopers also blew my mind because it’s particularly impossible for any hooping success for me. But I was delighted to witness such fantastic performing from the dancers and jugglers.

I am happy with the fact that Logan’s canvas was immediately purchased upon completion to a man I recognized named Mitchell. I said Hi and he asked if I was at the Days ‘N Daze show last week? I nodded and immediately remembered him! I told him about my blog about the show getting praised by the band and we had a good chuckle. Then he returned to Logan and the transaction was completed. Mitchell now has an original Logan Rodgers canvas! Talk about an exceptional piece of art and history! 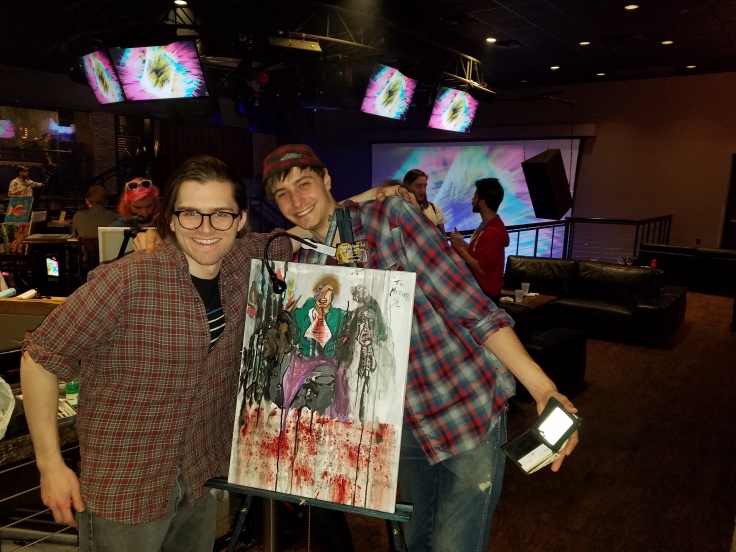 To end Jam for Youth Logan praised the invaluable assistance I provided and offered a couple of prints for my help. Here they are: 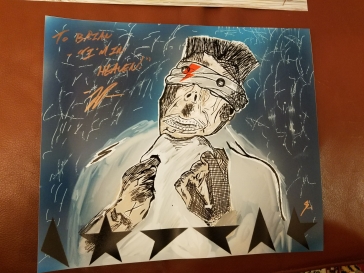 “I’m in Heaven” by Logan Rogers 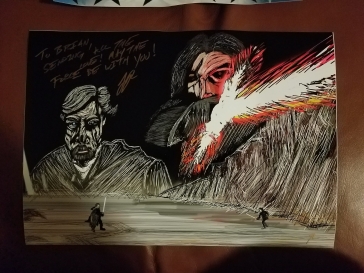 I very much enjoyed this event and it was fun working Logan’s merch table. The artists present were very nice to talk to as well! I even met an artist downstairs that I knew from my favorite local art facility, The Gamut Gallery, located right around the corner from my apartment so I’m a regular. This artist’s handle is Blaster (@rcblaster). I had no idea he would be there, but I looked at the art on their table and I instantly recognized the style from the Gamut’s exhibit called Sq²[Squared] which was a collection of 100 works sized 10′ x 10′. His piece was an titled “Pickle Rick” and is below:

I quite enjoyed meeting the artists that participated in this event. The musicians playing tonight were very entertaining and the ones I spoke to were wonderful people! This was a great event and thank you Logan for asking for my assistance!

A terrific ending to our entrance to summer.

And remember, get off Netflix and go see live music/art/theatre/dance or strike up a conversation with a stranger. The world will get brighter if we can all do something this simple!