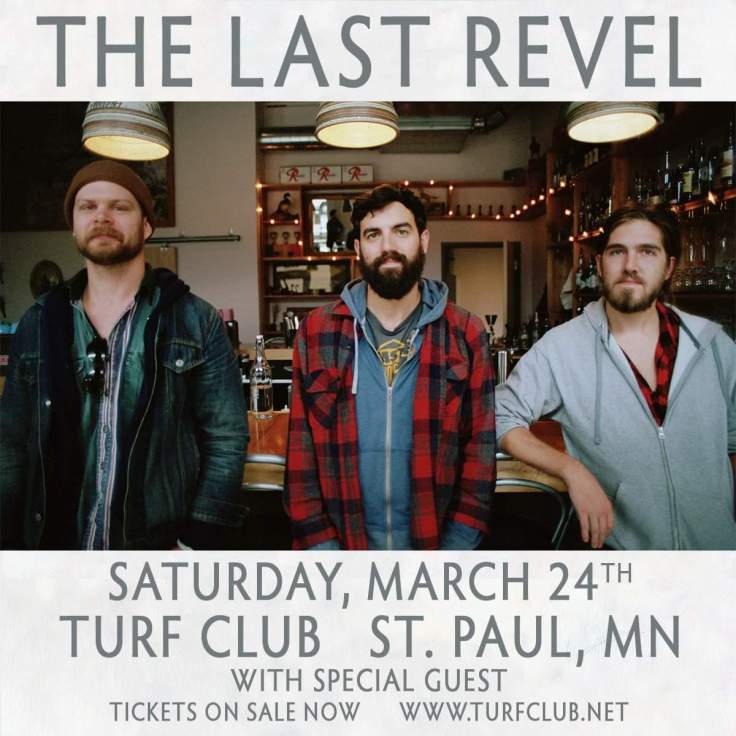 In the current music sphere we all exist in one band has been a particular favorite of mine, The Last Revel. A trio of men collectively playing the guitar, banjo, upright bass, fiddle, and kick drum. They label themselves as ‘Front Porch Americana,’ but their level of bluegrass is very high. 2018 welcomed spring with open arms and delighted ears. The Last Revel came back to the Turf Club with a truly appreciative crowd. This show Sold Out quickly which made my excitement very high for this show. They are celebrating their recent album, Hazard & Fate, a fantastic entry in the band’s collection. I was very excited to hear the different eras of the TLR played.
Starting the night out hot was a guitarist from the greater Chicago area by the name of Chicago Farmer, aka Cody. He brought his guitar on stage and dazzled us with his brand of folk/rock music commenting on the society within small town America.

Upon entering the stage he gave us a bit of info about his early life growing up in small town Illinois. I could relate having spent my early years in small, Chicagoland town(Lemont, IL to be specific). Cody emphasized the ‘unsung heroes’ of the working class communities(ie assembly-line workers, mechanics, etc…). But he really got my attention with the song ‘Dirtiest Uniform.’ A great tune focusing on how judging a someone solely by their appearance rarely, if ever, works in your favor. A recurring theme of Cody’s music is honor and the noble nature of those not generally thought of as ‘conventional’ members of middle America. I agreed with Cody’s commentary and grooved along with his philosophies. His lyrics, to me, took me on a journey questioning certain, personal ethos and allowing new points of view to surface. I felt as if I was conversing with his music. That ‘conversation’ with a song is what I like to experience in the music I listen to. I’ve always loved being an active audience member and that is how I  feel I participate in music. Having this ethereal talk with the song has helped me through life.

Powerful lyrics and great stage presence made my official introduction to Chicago Farmer a great one. The lyrics in the song ‘Umbrella’ are especially powerful for me.

“I wanna sing you a sad, sad song, that I wrote to make you smile”

I find these words perplexing yet highly inspiring. What philosophic conundrum does he want us to exist in? Whatever the endgame I’m totally on board! With these lyrics blazing my future societal endeavors I was ready for the Last Revel to take the stage. As soon as Lee, Vinnie, and Ryan stepped onstage the response from the packed house shook the building to its core.

Every song had the same response from the crowd, enthusiastic singing along! I am usually the one in front mouthing the words, because I’m not going to sing as I’d end up singing louder than the band. Not cool! So I’m in front mouthing the words to each song and I usually get a small appreciative nod from whichever member is on that side. I have loved every Last Revel show because the genuine love and excitement is palpable from the crowd. It’s so enjoyable to be in the presence of musicians that honestly enjoy every second onstage.

Vinnie absolutely slays on his fiddle!

Playing new songs with a few classic tunes gave us a great variety of their collection. The night really came alive when they played my personal favorite, Unbound.

And for the Finale…

The night came to an end as they invited Chicago Farmer back postage to sing a tribute to the great Neil Young.  They played the song “I Wanna See You Dance Again” and the crowd gave a resounding “Hell Yeah!” To which they gave a sweet wave and exited the stage.

So as I’ve said multiple times before, I urge all of you to leave your house and get out into the world and see live performance because it’s what makes this world go round.