As I was finishing up a shift at the Southern Theater with no drama from any patrons I felt my night was off to a Great start. Just as I was received a text from my friend who shall be named “D” in this situation. I could tell you their name, but if I did I’d have to kill ya🤣. Just kidding! D asked if I wanted to join him at Club Underground, located in the basement of Spring Street Tavern in NE Minneapolis. I’ve seen a dozen or so shows here so I was familiar with the realm I was about to enter. Confidence was with me as I knew a fantastic night of hard rock/punk was on the bill. 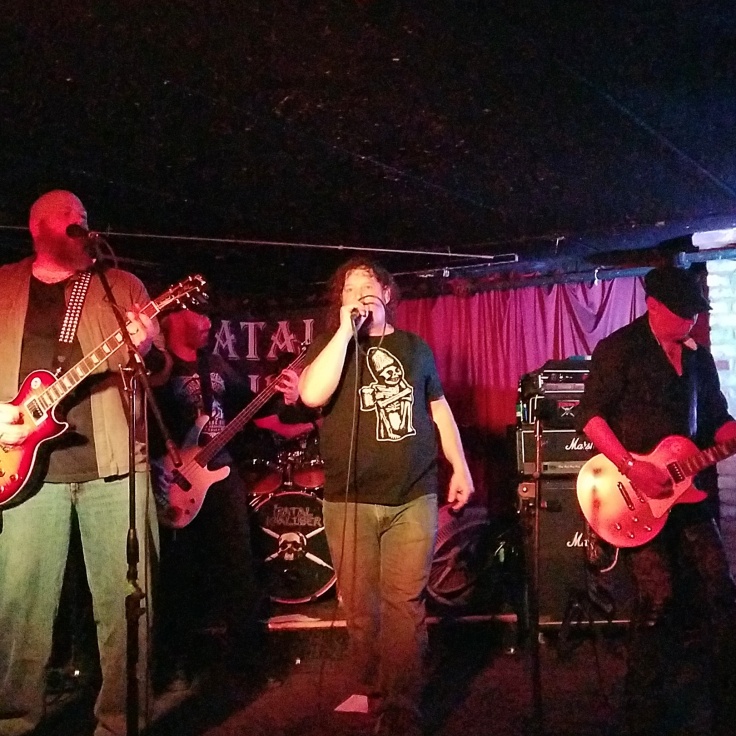 Fatal Kaliber rocking!
The excitement was brewing strong at this portion of the night.

Active Measures playing ‘Hostages’
I kept humming this tune for the next many hours due to its modern relevance. I am aware that the U.S. has strict voting laws meant to stop voter fraud, but these lyrics activate the riot in me.😈 I think the ‘riot’ in me will stick to the local punk shows and spreading happiness everywhere I go. During the time between songs Al Dentay, the lead singer, held up a t-shirt and asked, “Anyone wanna wear this?” I screamed with my hand in the air. I believe I made the right choice.🙂

I disgust myself😎.
The final band of the night was The Grand Machine, described by Classic rock magazine as “Glam without the eyeliner.”

To finish a phenomenal night of rock & punk The Grand Machine played us into the cold, cold night. I thank all the bands for a fantastic night of rock and great political punk!
As always, be nice to each other!
Cheers!