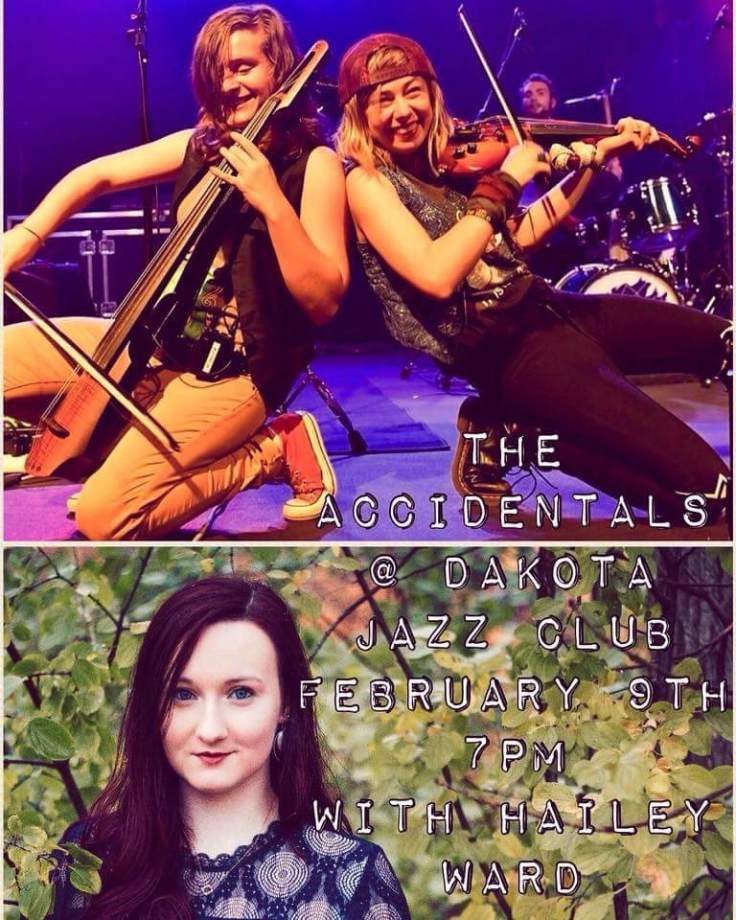 In the scene after the horrendous week of Stupid Bowl mania I was very pumped to see one of my new favorite bands called The Accidentals. They are a young, alt folk band from Michigan. The night began with some folk from a local songstress by the name of Hailey Ward. She had incredibly passionate vocals with superb uke-ing that made me hoot ‘n holler throughout her set.

Now onto the band I came in for, The Accidentals As you can see from the image above they know how to rock. They are made up of Katie(guitar/cello), Sav(violin/bass), & Michael(percussion/awesomeness🙂).

As you can see from the vid they play seriously impassioned music. The intensity of their live show is the reason why they are a must see. As one who is activated, emotionally & physically, by live music I can’t describe how their performance makes all the bad in the world melt away.

The night concluded with a few of their classic tunes(not sure if they’re old enough to have a classic period). Songs like ‘Michigan again & again‘ concluded this night of sonic brilliance.

Before I made my way home I stopped by the merch table and met the band. The Accidentals operate as a family-oriented institution so I was able to meet some of the parents. I was sure to praise each of the band to their respective folks. I was met with some of the biggest smiles ever!

In the end, this night was superb because these musicians obviously love to play. And that means the energy in the room was turned up to 11!

I apologize for not many pics or video, but the Dakota said filming was prohibited. I was very sly about my capturing of video. But I didn’t want the feds trailing me home due to any illegal filming. So if you can’t get ahold of me just remember that I told you of my crimes😕.

And remember get out and see live music! Netflix will still be there in the wee hours of the night, but live music & art needs as many attendees as possible! And again Be Nice To Each Other G’Dammit!!

Cheers and thanks for reading!

I’ll leave you with some Bill & Ted amazingness!